On a typical wet and windy English summer 75 years ago, generals from the American, British, and Canadian armed forces  were anxiously  looking at weather forecasts.  The planned seaborne invasion of Nazi held France was limited to a select few days where there would be a full moon for aircraft to see targets and high tides to get troops as high up the beaches as possible.  The 5th June 1944 was selected as the ideal date, but on 4th of June high winds and heavy seas made it impossible to launch landing craft, and low clouds would prevent aircraft from finding their targets.

Just as commanders were on the point of postponing the invasion for another month, the Allied meteorological team predicted that the weather would improve sufficiently so that the liberation  could begin on 6 June…

The 75th anniversary of the greatest military exploit  that the world has ever seen will see huge celebrations across the Normandy region, with special exhibitions, installations and re-enactments along the stretch of coastline that includes the Utah, Omaha, Sword, Juno and Gold landing beaches.

Our Normandy tour on 21st July visits many of the key locations, including the landing beaches, museums at Arromanches, St-Côme-du-Mont  and Ste-Mère-Eglise, as well as the American cemetery  at   Colleville-sur-Mer, above the Omaha beaches where the fiercest fighting took place.  Omaha in particular is an incredibly moving testament to the bravery and sacrifice that so many young men gave to liberate the continent from Nazi tyranny.

The tour is not just about the war, taking in as it does the astonishing Mont St-Michel with its 12th Century Abbey , and the town of Bayeux with its legendary tapestry telling the story of the Norman Invasion of England in 1066.  All of this is linked by quiet cycling roads through woods and forests, alongside beaches, and through pastures and orchards producing world renowned  cheeses, butter, cider and calvados.

You can get more details of the tour here! As with all of our tours, the Normandy Tour features character 3- and 4* accommodation, and great restaurants specialising in local cuisine and produce, quiet cycling routes and our friendly, knowledgeable, attentive bilingual guides! 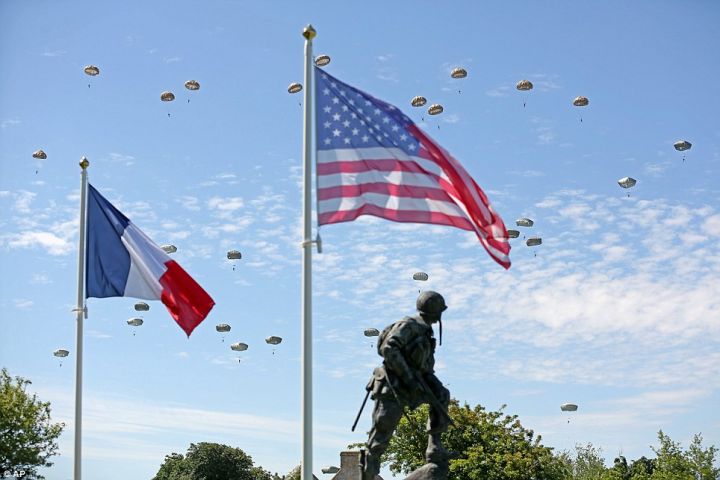