If you have ever been fortunate to indulge in a picnic on one of our tours you will know that local cheeses play a big part. In fact, cheese is available at your breakfast, lunch and if by dinner you still do not feel you have had enough of this yummy goodness then there is always the cheese option before dessert!

Quite often when cheese is a dinner option some of our guests INITIALLY say no, however minds are easily swayed when the cheese arrives.

The cheese course can be offered up on a plate; or via a chariot. Yes that’s right,  the famous chariot de fromages!  A cart filled with more french cheeses than one can imagine rolled to your table for you to select.

How do you even start to choose your cheese?

When the plate is served to you the cheese is placed in a specific manner. Your server will advise you what cheese is on your plate and the order in which to eat them.

Why is there an order to eating cheese?

In order to ensure your taste buds are able to appreciate all cheeses on your plate, you are to eat from mildest to the strongest..think Brie, goat cheese, roquefort. If you were to eat the strong one first…well you get it. Yes, we take our cheese seriously!!

In reality there are many many favorite cheeses we enjoy as we like nothing better than breaking off a piece of baguette, grabbing a chunk of cheese and washing it down with a lovely glass of wine but we thought we would start with some french cheeses that you may not be as familiar with.

On all our tours you will discover the local cheeses and other products the region is known for which brings us to our first cheese,  Mike's favorite french cheese that comes from the Dordogne region.

Often people think of Dordogne and the famous Rocamadour goat cheese ( we ride by this wonderful smelly goat farm La Ferme la Borie d’Imbert on the Dordogne tour on our way to our hotel Thursday )  however, the Dordogne region offers many other cheeses. One of those is Trappe Échourgnac or more specifically Mikes favorite  the Petit- Noix Trappe d' Échourgnac. 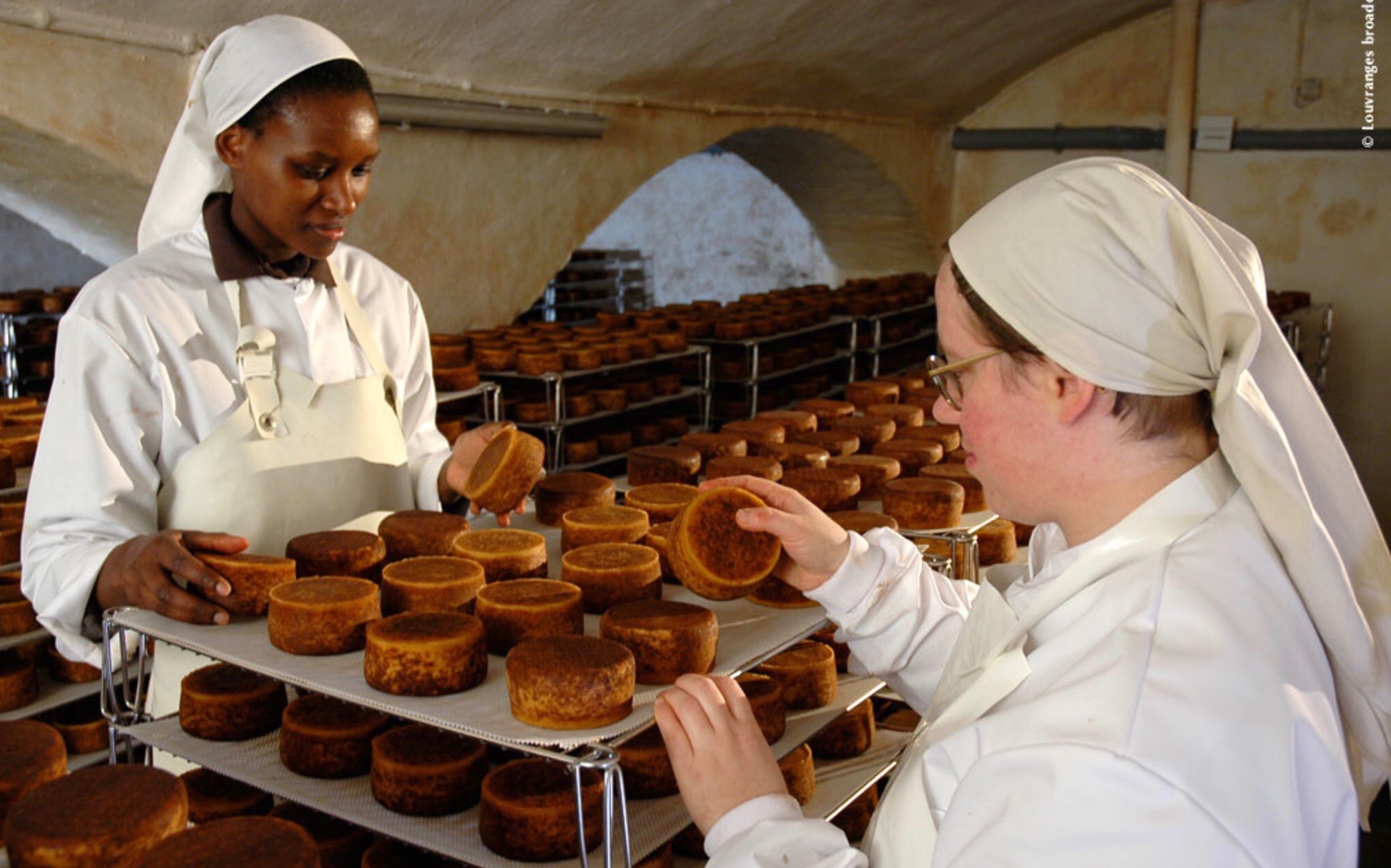 Sisters at the Abbey Échourgnac

Échourgnac is located between the start of our Bordeaux Wine tour in Libourne and our Dordogne Caves and Castle tour.

A cow’s cheese,  the original and still made Trappe d'Échourgnac Nature (natural) dates back to 1868 where it was first produced by the monks at the Abbey of Échourgnac until 1910 when the monks left.  Thirteen years later the Abbey was taken over by the Cistercian sisters and production started once again.

As you will learn on our Dordogne Caves and Castle tour, walnuts are  another speciality of the region and in 1999 the Abbey of Échourgnac created the Trappe d'Échourgnac Petit Noix where the rind is washed in the ”Liqueur de Noix”  Walnut liquor produced by the Distillerie du Perigord in Sarlat. We stay two nights in Sarlat and will have a chance to purchase these small bottles of liquor to take home as souvenirs.

The cheese has a very pale interior and a distinct walnut aroma but there is no taste of the actual alcohol just a lovely blend of walnut and mild creamy smooth dairy flavours. Thanks Mike!

Last year we launched a new tour Mont Aigoual and The Cevennes and what we love about exploring new areas in France is the new culinary delights this brings.  Susan shares her story on her favorite cheese.

Having dinner one evening at L’Imprevu in Meyrueis ( a Tour de France Stage 6 stop for 2020) , the owner asked us if we would like to try a local cheese, and when he meant local he meant local!  15km away is a village Hyelzas with less than 50 inhabitants. Since 1970 the village has had a cheese dairy run by the Pratlong Family and it is this cheese dairy that brings life to this village.  The Grandson of the Pratlong family had taken over this dairy and created the ‘Titounet”.

Titounet means "little lamb" in Occitan, the old Romance language spoken in the southern France. Therefore you have probably deduced this is a sheep cheese. The cheese made from raw sheep milk is matured for two weeks and is packaged in a traditional artisanal box. The cheese was served warm and you scoop out the creaminess with a spoon.  The taste similar perhaps to a camembert but with a subtle sweetness but still enough tang! We ate it later in the week at a picnic ensuring it had come to room temperature and it was just as delicious. At this point to enjoy this cheese you will need to join us here in France!

It was hard to get David to commit to just choosing one cheese and it would appear we need to dedicate an entire blog about cheeses from Burgundy ( Bourgogne) - they are amazing to be fair, however when pressed, as one who knows him may expect, he chose a mountain cheese.

Beaufort is a town in the region of Savoie and where the Beaufort cheese gets its name. It is a favorite place for cyclist in the area to ride to as it has a bustling little centre with enough cafes, boulangeries and restaurants to meet for your lunch or mid ride coffee shop. The Beaufort cheese tart is the hit amongst cyclist looking to refuel. We will see if Mike can whip one up for us and share his recipe!

Many of our guests who have ridden our Legendary Cols tour over the years will be familiar with this stop in Beaufort as on our tour it is the lunch stop when they ride the Cormet de Roseland and the more recent Lake Annecy tour introduced in 2018 as a coffee stop. Tour de France viewers will have seen Beaufort no less than 10 times featured in the tour with the most recently seen last year 2019.

There are 2 seasons for Beaufort cheese.  Beaufort d’été ( summer) made from June 1 to October 30 and Beaufort d'hiver (winter) made from November 1 to May 31.

David’s preference is for the Beaufort d’été where the cows have roamed the grassy fields eating the Alpine herbs and wildflowers which gives the cheese a fruity taste.  During the summer when riding in the Savoie region you often run into the farmers walking their cows down the streets bringing the cows to different pastures once they  have effectively “mowed” the fields of the wild flowers where they were!  Beaufort d’hiver on the other hand where the cows are sheltered  in the winter and feast on the hay gathered during the summer which produces a sweeter taste. 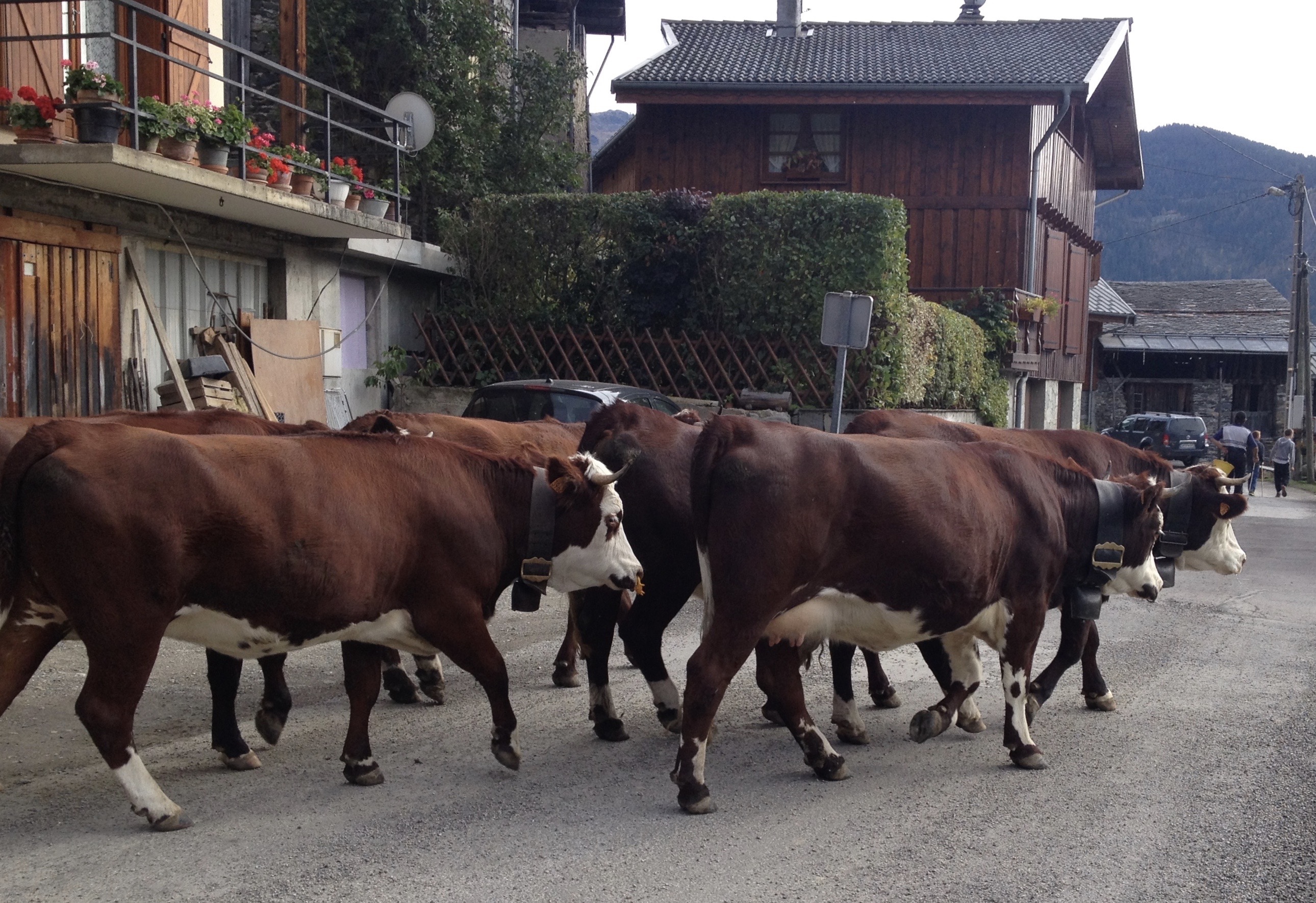 There you have it 3 of our favorite french cheeses, we hope you can join us on a tour and try them! Book Now for 2021