Exploring some of our hotels Part 1 - Burgundy Wine Explorer Tour

In our Autumn/Fall Newsletter we told you we will highlight some of the amazing locations we stay at. All selected for the character, charm and for the people who run them! We have missed all of our partners this year and we look forward to introducing them to you when you holiday with us next year! Here is a taste of one of our amazing accommodations from our tour in "Bourgogne" Burgundy region of France.

Cycling in Burgundy often takes people by surprise due to the sheer amount of vineyards that we ride through. La Bourgogne is not often thought of as the “wine destination” and people are genuinely excited to learn about the wines of Burgundy and intrigued in how they relate to the many Châteaux and Abbeys in the region.

So where better to start than a stay at the magnificent Château d’Igé?

Surrounded by vineyards, the first documented history of the Château d’Igé begins with a legal document in 1235, bearing the seal of King Louis IX. The document discusses the subject that the Abbaye de Cluny was trying to prevent the Count de Mâcon, Lord of Igé, from constructing a fortified manor.

Shortly after the fall of the Bastille during the French Revolution, the Château d’ Igé was sacked and pillaged, with some outbuildings destroyed. As the story goes, the lord of the château, had to abandon the property and hide in the woods. It is believed the château was especially targeted because the lord had laid claim to a well and had even gone so far as to enclose it. When the revolutionaries ransacked the property, the enclosure around the well was the first to be destroyed.The château gradually deteriorated until 1972 when Henri Jadot restored and transformed the property into a hotel which it remains today and weclomes you on the first night our Burgundy Tour! Your stay in this luxury Castle hotel will not disappoint.You will be sad to leave but will need to get on your bike the next morning and ride to the Abbaye de Cluny to continue the history of the regions and it’s wine!. To book or for more details click here.

Each room has its own style and character, some with vaulted ceilings, canopy beds, period fireplaces and tower rooms that will take you back in time but leave you with the feeling of warmth. And while the rooms are magnificent, the famous restaurant under the George Blanc signature is where you will experience dining just like the Kings and Queens of its past! 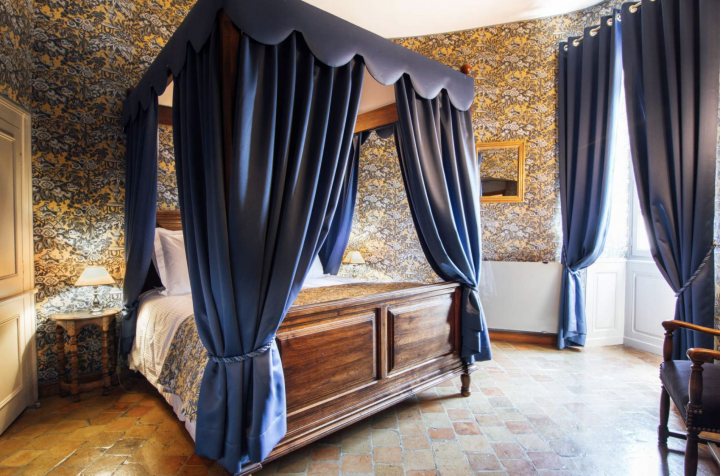